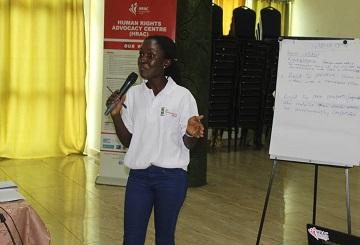 Ejisu-Krapa (Ash), Aug. 08, GNA – The public has been counseled to show kindness and empathy to those with mental disabilities and avoid the use of certain words and actions that will stigmatise them as “mad” people.

Ms. Cynthia Nimo-Ampredu, the Executive Director of the Human Rights Advocacy Centre (HRAC), a human rights-centred NGO in Ghana, who gave the advice, said such negative perceptions and stereotypes led to the abuse of the rights of the mentally-challenged seeking treatment at faith-healing health centres.

This, she said, violated their fundamental human rights, including; their right to dignity and respect, as human beings.

Ms. Nimo-Ampredu was speaking at a day’s Training of Trainers (ToT) workshop on rights-based approach to mental healthcare at Ejisu-Krapa in the Ejisu Municipality in the Ashanti Region, for 27 selected operators of the traditional and faith-based mental health centres in the Region.

Citing the increasing trend of some acts of maltreatment - severe beatings, denials to food and shelter, handcuffing and other forms of abuse, meted out to mental patients at traditional and faith-based mental health centres, she said these infringed on their fundamental human rights and dignity, and needed to stop.

The training activity, organised by HRAC in collaboration with MindFreedom Ghana (MFGh) and the Mental Health Authority, was part of the STAR-Coalition on mental healthcare.

It also formed part of STAR-Ghana’s project implementation on promoting quality access to mental healthcare and rights for persons with mental disabilities in traditional mental health centres in Ghana.

The programme is receiving funding from the STAR-Ghana.

Improving participants’ understanding of human rights, especially in relation to mental healthcare of persons living with mental disabilities to enable them provide human rights-centered services to their clients.

Ms. Nimo-Ampredu urged government to disseminate the mental health guidelines across the country particularly to the traditional and faith-based health centres to help stem such human rights abuses.

She called on all stakeholders to support their cause of educating the public which involved embarking on community outreaches, in order to curtail the vulnerability of persons with mental illness.

Mr Joseph Kofi Takyi, a participant of the workshop and the National second Vice President of the Ghana Federation of Traditional Medicine Associations (GhaFTraM) commended HRAC and partners for the training and also called on the participants, to follow the mental health guidelines which seek to promote the dignity and human rights of their patients.

Reverend Paul Kusi, a Pastor of The Apostles Continuation Church International at Jachie in the Bosomtwe District,a participant, said it was necessary for his colleague practitioners not to be spiritually inclined in healing their patients only, but should also be considerate of the physical aspects which considered the human rights, dignity and respect of their patients.