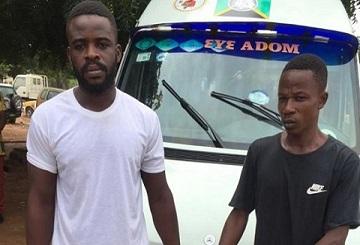 The commercial bus driver and his mate, who were publicly captured in a video assaulting a police officer have been freed.

The two – Francis Buabeng and Albert Ansah were fined GHS 3,600 or will have been sentenced to 12 months in prison in default.

A Circuit Court in Weija, Accra, convicted them after they were found guilty of assault following their arrest in March 2019 during which they exchanged blows with a uniformed police officer.

Several Civil Society Organizations including the Human Rights Advocacy Centre, Amnesty International Ghana, as well as Human Rights and Governance Centre, volunteered to assist them to get justice.

“They have been found guilty of an assault of a police officer. They have been fined and if they are not able to pay, they will be put into a jail term of 12 months. That was the pronouncement of the court. Fortunately, the GPRTU and other friends and sympathizers put together their resources and close to GHS 4,000 of the fine was paid.”

The two, who were captured in a viral video assaulting a uniformed police officer, were quickly found out by the police, arrested and put before court.

A lawyer for the suspects, Francis Xavier Sosu in an earlier Citi News interview said there were visible signs of brutality meted out to the suspects while in the custody of the Odorkor Police Station.

“It is very sad looking at them and seeing that these are people who have really suffered some form of abuse. You can see clear signs of Post Traumatic Stress Disorder. You can see the timidy and the fear. You can feel their emotion. From our conversation, they have been safer in the BNI custody. It looks like the BNI has provided them a safe haven from abuses by the police,” he added.